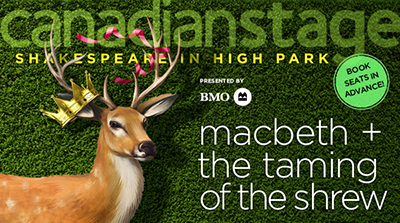 As much as I love seeing Shakespeare in High Park, I invariably leave there with a sore back.

I trekked to High Park again last night, this time to see Canadian Stage’s Macbeth, with two different friends.  We showed up around 7, and this time, we were forced to sit off to the side of the main seating area, it was so packed.  It was a bit frustrating to realise that, in order to get reasonable seats, one has to either show up two hours before curtain or book the cushion seats in advance. I’m a bit wistful for the old days of just showing up and finding seating where you can, but I guess CanStage has realised what a cash cow this can be, and has reacted accordingly. At least the pizza was still only $3.50 a slice…

Now, to the play.

On the way into the main amphitheatre at High park, CanStage has placed two bubbly volunteers to remind us of all the rules of the space. They also announced the running time of the show, and that it would be performed without intermission. The running time was was 90 minutes.

This gave me pause for concern.

I seem to encounter a lot of people who have decided that Shakespeare is either too long, too difficult, or not “accessible” enough. This seems to grant them the right to butcher the Bard’s words, to “fix” or “adapt” his works, or the worst offence of all, to “update,” “modernize” or “translate” his words into contemporary English.

Now, I am not against adapting Shakespeare’s works. A lot of Shakespeare is archaic, the meaning of the references lost, and those references can be pared down, if only to better reveal the meaning. I myself did a 45-minute long Hamlet when I was in high school, adapted by our intrepid local director – I played Claudius (a casting decision I still question to this day). Because of this abridged version, I can still recite Claudius’ opening speech – “Though Yet of Hamlet, our dear brother’s death / The memory be green…” – but it’s an abridged version of it. Not something I can rock out in front of students to impress them, unfortunately.

And of course, there have been some brilliant adaptations of Shakespeare’s work, generally in satire. We need only look to The Reduced Shakespeare Company’s Complete Works of William Shakespeare (Abridged), Stoppard’s Rosencrantz and Guildenstern are Dead, and countless others to see that we can play with Shakespeare’s works intelligently, in a way that pays homage to his words and his characters. And as we know that most of Shakespeare’s works were ripped off (sorry, sourced) of other works, it’s not at all unsurprising that modern reinterpretations such as West Side Story, Kiss Me Kate, 10 Things I Hate About You or She’s The Man still resonate with a contemporary audience.

But the editing of Shakespeare can be problematic. It is an issue I am struggling with now, as I seek to pare it down from its usual 2.5-3hr running time to a more manageable 90 minutes. Editors often show their own bias in the editing, creating a new story entirely rather than “shrinking” the original.

I am thrilled to say that CanStage’s adaptation of Macbeth was the latter and not the former.

As I mentioned in the previous post about Taming of the Shrew, CanStage is doing these two plays in rep, so the cast of Macbeth was the same as Shrew. I am always fascinated (and usually impressed) to see an actor create incredibly distinct characters on different nights, and this was the case again. A prime example is Ryan Hollyman, who played the delightfully campy personal assistant Biondello in Shrew, and then last night, turned out a gut-wrenching performance as Macduff.  The same can be said for most of the cast, although I found Lady M a bit… shrill, and Malcolm, well, cardboard.

The adapted script was really bang on – it had an economy (a husbandry, if you will) to it that allowed the story to shine, and the great monologues and soliloquies to stand out. It was tight, it moved well (much better than Shrew did) and it maintained all the tension.

I have to say that there were some brilliant directing decisions made, very innovative and new. The way the witches were handled, the dream sequences, the descent into madness were all beautifully done. It was visually quite stunning.

My one major beef with the show is one that came up a few years ago during a particularly awful production of Hamlet I brought my class to see.

In my understanding of the play, Macbeth’s major flaw is his inability to think – he is a soldier, used to following orders and carrying out commands, not someone used to making them. Once he becomes King, he stops doing and starts commanding – and this is where things really go to hell. Is the awful production I just mentioned, the director decided that it was Macbeth who was the 3rd murderer sent to kill Banquo and Fleance, and he was then part of every murder thereafter. It’s just… wrong. It changes the meaning of the play.

There was an instance of this in last night’s Macbeth: Macbeth himself turned up to murder Macduff’s family. It didn’t sit right at all.

Having said that, I was thoroughly impressed with the show, and I’d love to go see it again. The direction was solid, some of the performances truly stellar, and the design was flawless.

Pretty fantastic for a 90-minute Macbeth.